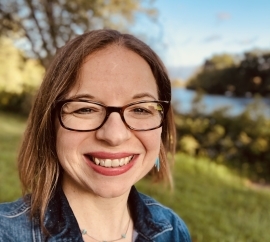 Claire’s career in domestic and international health communication, community health, health literacy, and HIV pediatrics was sparked in 2007 in St. Louis, Missouri when she volunteered at a drop-in medical and social center for LGBTQ youth experiencing homelessness called The SPOT. Claire had recently returned from a year of teaching as a Fulbright Fellow in Mainz, Germany, but had not found a calling as a classroom instructor; rather, she had felt most interested and invested in how individuals receive and process information based on their life experiences, knowledge, and attitudes. At The SPOT, she was exposed to a different form of education: that of crafting creative programming and messaging around health, a topic every person has a lifetime of experiences with, and which is profoundly shaped by the broader community and societal circumstances in which we are born and live. In 2009, Claire moved to Swaziland, where she wrote a successful grant for, and then managed, a USAID PEPFAR grant for Save the Children Swaziland supporting a national network of social and economic protection for children who were orphaned or vulnerable due to the social impact of HIV/AIDS. Claire returned to the U.S. and completed a Master of Science in Health Communication at Tufts University School of Medicine in 2012.

In 2012, Claire became the Director of Health Education and Communication for PHACS. Since then, she has led communication efforts for PHACS, co-led outreach and engagement with caregivers in the Community Advisory Board (CAB), and co-founded a national Young Adult CAB for perinatally HIV-affected youth. She has also produced and disseminated a wide range of innovative and community-driven multimedia health education resources, and co-led the first qualitative research to be conducted within the national PHACS network. In 2020, she became the Director of the Health Education and Community Core. At the heart of her work in PHACS is a commitment to addressing the complex interplay of structural inequities based on race, gender, class, ability, and other factors that prevent individuals from living healthy, fulfilled lives. It brings her great joy to work with such an amazing, compassionate, and committed group to achieve the mission of PHACS.